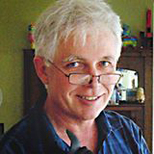 ​     An artist, filmmaker, and curator, Jim Miller’s connections with Condé and Beveridge stem back to the early 1980’s when their paths crossed at the artist-run A Space Gallery and the Independent Artists Union. In 2008 Jim and his filmmaking partner Roz Owen produced Community Matters, an award-winning short video about Condé and Beveridge. In 2011 they completed Portrait of Resistance, their feature documentary about the artists. After that Jim began to nurture interest and participation in the Public Exposures project. This summer he will join partner Roz Owen to help produce her feature drama, Historic Homes of the Future.

In the city that Condé and Beveridge call home, a public reckoning with their pioneering practice is long overdue. Recognizing this need, a small group formed to mark the fortieth year of their activist collaboration. The Public Exposures Collective includes documentary filmmaker Min Sook Lee, art theorist and historian Dot Tuer, labour educator D’Arcy Martin, and filmmaker/curator Jim Miller. In addition to the exhibition, collective members are also organizing the symposium for the last weekend of May, and preparing a book for later publication.